The first women were appointed as Drivers Assistants around 1977, shortly after the Equal Opportunities Act came into force. Many of the older drivers at that time had been footplatemen since before the war and some had very old fashioned working class attitudes. They viewed the modern generation of male DAs, like myself, who hadn’t spent 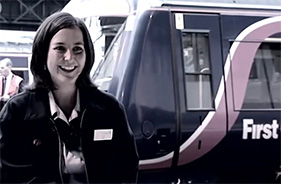 years cleaning and firing, with deep suspicion and it is hardly surprising that many of them were wary of the prospect of women entering the footplate grades. Frankly, they weren’t used to working with women and some were simply frightened of them! Things weren’t helped by the fact that these were the industrially troubled ‘seventies and that a few of the women who joined then were politically motivated and looking to cause trouble. Given the often poor reception they got, it was a brave woman who would be among the first in the business.

Eventually things settled down and the first female drivers appeared in the early ‘eighties. Attitudes, and the atmosphere of the job, have mellowed greatly since then and women driving trains are no longer a cause for comment. Even so, there are no more than a few of hundred women driving trains nationally, though London Underground has been especially keen to recruit them. Although the profession is and probably always will be numerically male-dominated, the macho and sometimes misogynistic attitudes of the past are long gone and women today need not feel intimidated about applying for the job on those grounds. Indeed, being a woman is probably now an unfair advantage in the intense competition for Trainee Drivers’ posts.

There is nothing in train driving that women are no perfectly capable of doing; the hardest physical task is coupling and uncoupling locos with the freight TOCs – and even this is more a matter of knack than brute strength. Another problem with the freight companies is that you can sometimes be on the loco for several hours and the alfresco toilet arrangements might not appeal! The only real reservation is as to whether the working patterns of the job are compatible with bringing up school age children without a suitably placed partner at home to help. Legislation which came into force in 2003 requires employers to give serious consideration to accommodating parents of young children on suitable turns where feasible. It’s still early days yet but it is only fair to warn that the limited experience so far has not been very encouraging. I suppose it is foolish to imagine that such accommodation doesn’t give rise to a degree of resentment among colleagues which, although it may be suppressed by anti-harassment policies, is undoubtedly there and has ways of making itself felt.

What’s staggering is that according to Aslef, across England, Scotland and Wales less than 7% of train drivers are female.

How to Become a Female Train Driver