Tamping machines, ballast cleaners, rail grinders etc. are known as On-Track Machines, or OTMs. These machines are driven, operated (and often partly maintained) by specialist OTM Drivers. The infrastructure maintenance companies which employ these drivers often recruit externally and train them from scratch. OTM drivers are required to meet the same medical and training standards 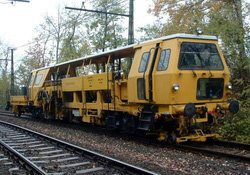 as drivers at normal Train Operating Companies.
Here is a description of what is involved, written by someone who is going through the process after coming out of the RAF:

“The selection process was in five stages and was managed by a specialist company in Derby:

My experience of getting the job was that the process was very similar to that employed by the RAF. It was a process that I was familiar with having run one of the RAF’s recruitment offices for three years. We where provided with standard briefing notes of the psychometric tests and examples of the aptitude tests. On the whole, the stage one recruitment process was a straight forward exercise in C.V. composition and submission. The selection process was challenging, comprehensive and left me feeling I was joining a professional organisation.

The position was pitched as a three year traineeship with the new employees being trained on the company’s various OTMs, firstly obtaining competence and operational effectiveness on one machine before moving on to the next. This is interlaced with driver training, initially by being trained to operate as a Driver’s Assistant.

Driver training starts with five weeks of classroom training in rules and regulations (GE/RT 8000) with weekly assessments culminating in a final assessment. This entitled us to a wage rise which was very welcome! We then spent a week on the ‘principles of route learning’, bringing together all the sources of information available to produce route maps, culminating with our producing a route map we would use later on. Our next training event was at the EWS class 66 simulator facility in Doncaster. This exposed us to various scenarios covered in the rules book and allowed us to practice our communications procedures (and being ex-military getting out of the ROGER habit cost me a few quid)!

The next phase – one that we all had been looking forward – to was practical handling. This was done initially on Tampers and Dynamic Track Stabilisers under the watchful eyes of a mentor Driver/Conductor. We had to achieve 115 hours driving, 40 of which had to be at night, with progress tests along the way. Half way through our ‘hours building’ we were trained on the MPV (Multi-Purpose Vehicle), used by our company on the sandite contract to treat the rail head during leaf-fall season. This allowed us to drive the MPV at night and during testing conditions, again under the watchful eyes of our Mentor.

This all culminated in a week of examinations with our final handling test, traction knowledge test, rules and regulations oral test and final debrief before being passed out as OTM drivers with a nice wage rise. All in all the process took a year – but this was punctuated by normal track maintenance work during weekends.

As a post script to this story my company, Fastline, is doing rather well in the freight sector and I duly applied to transfer to the freight business. I was successful and moved home from Scotland to Derby to begin class 66 training. I hope to be qualified in the next few months….

The company seems to have a good remuneration package within the rail plant hire sector. Trainees start at around £20,000 p.a. and can progress up to perhaps £30,000 as a qualified OTM driver. Despite having the same skills as a TOC driver, plus the skills of operating and maintaining complex, computer controlled plant and an in-depth knowledge of track geometry, the basic salary is 20% to 60% less than for TOC drivers. And then there’s all the night work… !

The job is certainly not regular, either in routes worked over or the equipment used. There are plenty of extra turns available to those who want them, with the top earners making around £50,000. Those who stick to just their rostered turns earn around £35,000 gross. However, as I mention above, there is now the opportunity to progress to conventional freight train driving”

(My thanks to Stewart for this contribution.)